This submission is selected as the Winner for Bhutan, given the innovative approach the country has  adopted by introducing rated criteria for evaluation and selection in their civil works. The point-based system for evaluation of bids related to civil works has evolved and become a good model for Bhutan in terms of selecting the right contractor while considering promotion of local contractors, skills, materials, etc. The e-tool Contractors’ Registration System facilitates direct entry to Higher Class as a contractor qualifies based on historical data of the contracts completed. This has increased the number of Large Class contractors from 66 in June 2011 to 219 as of  December 2017, leading to increase in competition and value for money. 11,682 government tenders have been floated on the e-tool, with 2,000 works being awarded annually. With the use of e-tool, qualification review time has now been reduced from average of 45 minutes to maximum of 15 minutes for every bid evaluated. It is innovative and replicable in countries like Bhutan. 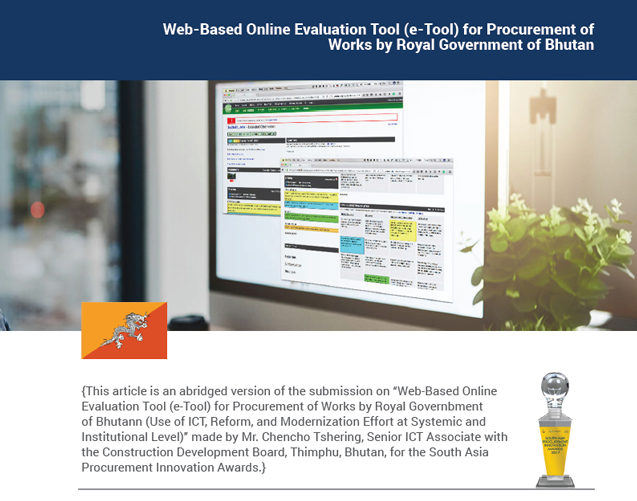 Construction Industry is Bhutan’s growth engine, contributing 15% to the nation’s GDP. The Royal Government of Bhutan annually spends almost 60% of its budget on infrastructure development and procurement of works. As part of “Accelerating Bhutan’s Socio-Economic Development” in different sectors, the Royal Government introduced a pointbased system and evaluation software to finalize contractors for works above Nu. 4 million. Accordingly, database has been developed by Bhutan’s Construction Development Board (CDB) to evaluate the contractors’ profile based on their turnover, their human resources, equipments owned, and record of their past works. Introduction of this web-based online evaluation tool has to a great extent achieved uniformity in application of the point-based system and standardization in bidding for works, which is in line with the overall objectives of the Royal Government Procurement Rules. World Bank has also reviewed this system and recommended that the system is good enough for projects worth 1 Million USD (Nu. 65 Million). Most of the large works in Bhutan fall in the range Nu. 15 million to 70 million.

Owing to the massive costs involved, the Royal Government felt the need for reforms in its Procurement System. It entrusted this task to the Ministry of Works and Human Settlement (MoWHS), Ministry of Finance (MoF), and Construction Development Board (CDB). The reforms focused on:  The reforms led to development of the point-based online evaluation tool (e-tool), which is directly linked to the contractors’ profile/database maintained by CDB.

The point-based system for selecting contractors for construction projects costing more than Nu. 4 Million is used by all government procuring agencies, including corporations and NGOs, who are outside the preview of the government procurement rules. The CDB Database is integrated with other stakeholders, like Royal Civil Service Commission, Road Safety and Transport Authority, and Department of Civil Registration and Census. This helps validate and authenticate the CVs of key personnel and ownership of equipments owned and proposed by the bidders/contractors during the bidding process. It helps check duplication of same resources in different projects. This ensures that the work is awarded to contractors who have more bid capacity and resources. It also limits the number of works for each contractor as per the work ceiling approved by CDB.

The points/score for evaluation parameters, like the similar work experiences, bid capacity, and past performance ratings, are automatically generated by the e-tool from the contractors’ profile/database, thereby saving time for evaluation team and avoiding fabricated experience certificates. For contractors, the e-tool and CDB website provides single window services for all work-related tenders. For government, it has brought in more bidders, increased competition, and has checked collusion among bidders.

The reform in the Contractors’ Registration System, like direct entry to Higher Class, has increased the number of Large Class Contractors from 66 in June 2011 to 219 incorporated companies as of 15th December 2017, resulting in increased competition and value for money. 11,682 government tenders were floated on the e-tool and 2,000 works awarded in the year to the tune Nu. 54 million. The e-tool has reduced evaluation time from an average of 45 minutes to maximum of 15 minutes for every bid evaluated, thereby saving 8,000 working hours indirectly. Further, the procedure of recording and updating the Past Performance Rating of contractors on e-tool has had a positive impact, as it has become the basis for research in improving the construction industry and procurement process at large. The rating information provides the lists of performing and non-performing contractors, and sector-wise cost and time overrun of projects. This helps policy makers and project managers in management and policy intervention. Today, more than 250 procuring agencies, including state-owned corporations and NGOs are using the system.

The introduction of e-tool and pointbased scoring system has decreased the subjectivity involved in evaluation. Confidence among bidders and contractors has thus increased, as there is less human element in evaluation. Bidders need not submit their past performance, annual turnover, and similar work experience certificates; or worry about fabricated certificates, as all information is automatically pulled from the contractors’ database. The web-based centralized database and evaluation system provides for easy verification by all procuring agencies and fulfills the CDB’s mandate.

Any government agency can adopt the point-based system in whole or with little modification in the parameters. In case there are any changes in SBD and Procurement rules, the e-tool has provision to modify or adjust the scoring pattern for different parameters of evaluation, like bid capacity, performance ratings, credit lines, work experience, HR, and equipment scores. The system can also produce data, like the numbers of works awarded each year by every ministry, department, district, or municipality. Further, it can project the actual number of ongoing projects in one location. This gives a clear picture as to which district is getting more development activities.

In the initial phase, e-tool users faced difficulties, as they had to evaluate bid documents submitted by bidders physically.

At times, it was very difficult to determine the authenticity of documents. But now, data on human resources and equipments of winning bidders are locked in the e-tool on award of the work.

This avoids duplication and misuse of same resources in different projects.

There is a high chance of e-tool users of procuring agencies colluding with bidders and manipulating data.

To fix accountability and track the activity of e-tool users, an audit trail feature has also been developed to prevent misuse/manipulation of information.

The audit trail has become a deterrent for e-tool users, who may indulge in corrupt practices.

The need for data integration and reliable internet connectivity is, however, a necessity.

This has been resolved to a great extent by making e-tool web services available through the stable government intranet (T-WAN), since most of the users are government agencies requiring data integration with relevant stake holders.