In many countries, a desire to reduce corruption, improve transparency and efficiency, and to reduce collusion among bidders has prompted to establish E-Government Procurement (e-GP) systems. The Anti-corruption Summit, London May 12, 2016 -Communiqué says "Public contracting -including by international organizations and government budgets should be fair, accountable, open and transparent to prevent and expose the theft or misuse of taxpayers' money. We will ensure public contracts are awarded and managed openly, accountably and fairly, consistent with applicable law -making public procurement open by default -so that citizens and businesses can have a clear public record of how public money is spent. We will make greater use of e-procurement to make public contracting processes more transparent."

Rwanda began reforming its procurement system by passing a new procurement law in 2007, and establishing the Rwanda Public Procurement Authority (RPPA), a regulatory body, in 2008. At that time, the country began looking at how to modernize its procurement system. Rwandan officials traveled to the Republic of Korea among other countries, to look at how that country's electronic procurement system, one of the most advanced in the world, operated.

In 2013, the Rwandan government approached the World Bank to fund a feasibility study on the implementation of e-GP system.

Based on the recommendation of the feasibility study, RPPA set the following objective in developing the Rwanda e-GP: "Reinforcement of national competitiveness by improving transparency and efficiency in the procurement." The e-Procurement system is called UMUCYO, in their local language, which means "Transparency".

Upon request from the Government of Rwanda, the World Bank supported e-GP initiation under the Public-Sector Governance Program for Results started in 2014. The UMUCYO is a web-based and workflow-driven e-Procurement system, which was developed as part of World Bank Funded Public Sector Reform Program-for-Results.

The system consists of an online portal with modules for advertisement, e-bidding and disposal, evaluation, contract management, inspection and acceptance, framework agreements, catalog and shopping mall, where suppliers can register and submit bids online. The system is open to all (national and foreign bidders, consultants, and public members). During the registration process the system automatically access the database from Rwanda Development Board to authenticate registration status of bidders, Rwanda Revenue Authority to check the status of Tax performance and the Rwanda Social Security Board for compliance with fund contribution. It supports all the procurement methods and procurement processes provisioned under the act and additionally supports the e-Catalog as well.

After a bid is accepted, the system allows contract drafting and sending it to the winning bidder for review. After the supplier accepts and electronically signs the contract, the contract is shared to Rwanda's Financial Management Information System (SmartFMS) to issue a purchase order and to make payments.

The Bank provided technical assistance during development, capacity building and roll out. In July 2016, the government-initiated piloting of e-GP system in eight selected government ministries, agencies and districts.

The government reported a one-time cost of $7.8 million to develop the e-GP system, datacenter equipment, and capacity building as well as about $1.12 million in ongoing costs.  "while the initial investment in the system seems to be high, experience from around the world show that e-procurement provides powerful cost management solution that leads to significant savings of public spending," said Hiba Tahboub, Procurement Manager at the World Bank.  "The application of e-procurement will potentially alter the impact of the procurement function. Strategic sourcing will become more predictive, transactional procurement will become more automated, and supplier /contract relationship management will become more proactive. All these enhancements will lead to a more efficient and economic Public Procurement"

Before launching the pilot, series of training were offered to government officials from the pilot entities and the business communities on using the e-procurement system. Additionally, wide media campaigns were conducted across the country for awareness creation on the new system and encourage contractors and suppliers to register in the system. The training was extended to internet cafes operators as well, to ensure that Small and Medium Size Enterprises have access to opportunities in Public Procurement.

After one year of successful piloting the system, the government rolled out the system nationwide beginning July, 2017. The only government entities not using e-GP are the subsidiary ones (schools, district hospitals and health centers). Although these are more in number (over 3000), their total spend is much less and the system will be progressively rolled out to them beginning with the Financial Year 2019/2020

Some of the key statistics based on e-GP implementation is: 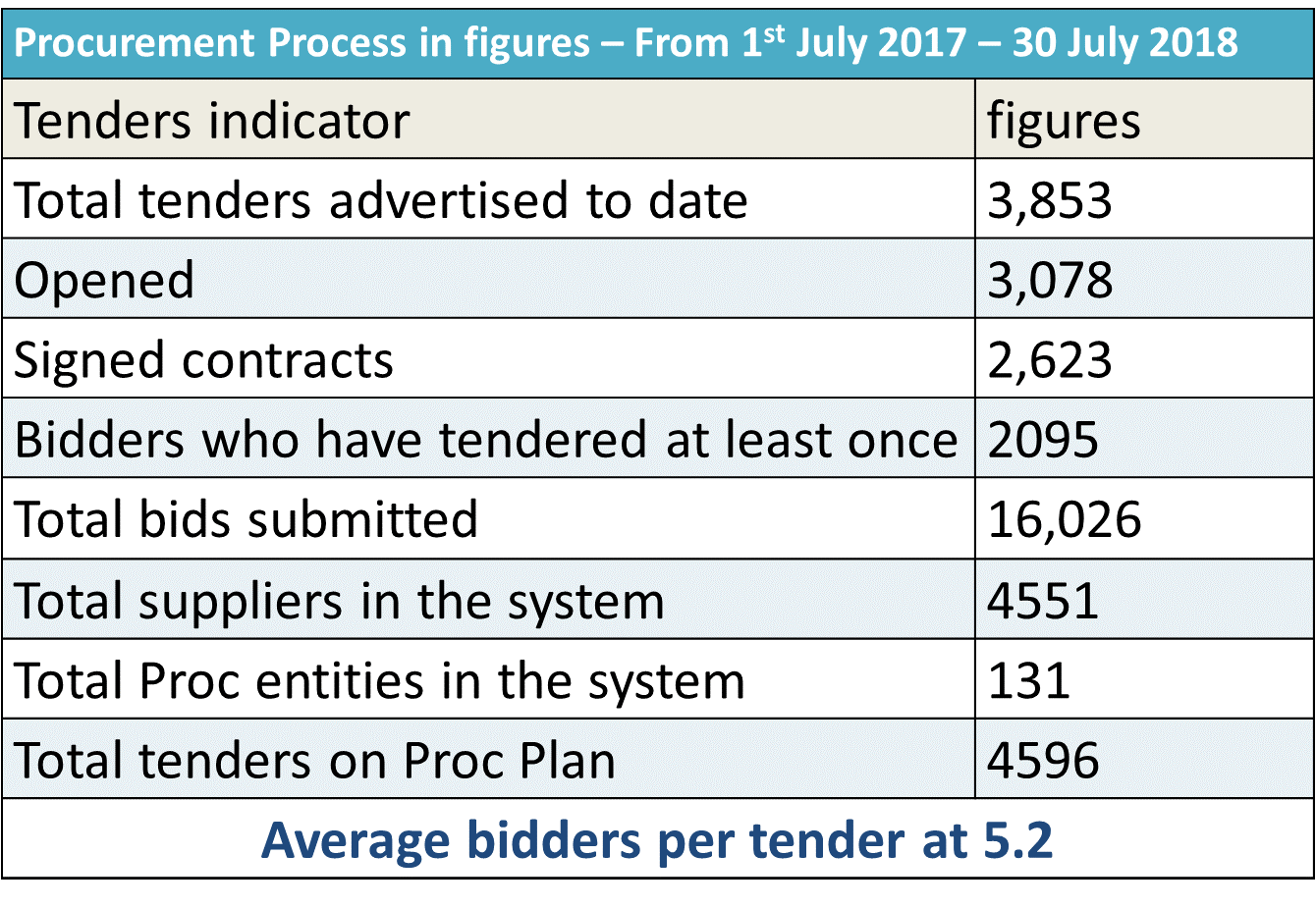 Some of the Benefits Realized at this Early Stage:

Rwanda has rolled e-GP system across the country for all procurement methods. Analytical studies are yet to be conducted to quantitatively establish the benefits. However, it's already proving to be a useful tool and has presented some benefits to users, as per their feedbacks. The system has reduced time and allowed cost savings for both government officials and contractors, as the single online portal provided all the documents and information required, eliminating the need for in-person visits and printing costs.

The government also reported "increased authenticity of procurement documents," as document forgery by bidders that had been a major problem in the past, are significantly reduced. Procurement Entity says, "we are happy that our internal contract approval process has significantly reduced. Each and every contract award decision used to go through review by internal tender committee, legal department and head of the institution and this has consumed a lot of time and the institution were always criticized for not delivering on timely manner". The system allows the same process to be carried out online in timely manner.

Director General of Corporate Service in Ministry of Agriculture (MINAGRI) says, "Procurement management of the Ministry has significantly improved as the result use of the E-Procurement system. He went on explaining, the E-Procurement system is web based and I can access from anywhere using my token. For example, when I am on mission I can click the button from where I am and the procurement process doesn't stop because I am away. The system also contributed in reducing fraud and corruption as there is no personal contact with bidders, and in unlikely event of such allegation complaints are received and responded to through the E-Procurement system in a transparent way." He added "before the introduction of E-Procurement I used to spend time to respond to bidders seeking information, lobbying and complaining. Now, after E-Procurement is introduced, my office is quiet and I can now focus on important issues."

The statement by DG of Rwanda Public Procurement Authority, summarizes the benefits of Rwanda E-Procurement, Quote, "Government procurement officials should take advantage of the time saved in transactions to ensure compliance, transparency, competition, fairness and record keeping and dedicate more time to achieve value for money, efficiency and effectiveness." Unquote.

The Bank assessed the e-GP system following Multi-Lateral Development Banks (MDB) e-GP Guidelines to use the system in the Bank financed projects. The assessment results show the system and implementation is in line with good international practices and can be used in the Bank portfolio. Progressively the Bank financed projects will start using the e-GP - UMUCYO from July 1, 2018 and by end of Q1 entire Bank portfolio is expected to be on e-GP system.

Rwanda is the first African country to implement such a system across the country covering all procurement methods. It has also rolled out nationwide in a very short span of time compared to other countries. The Bank financed projects and most likely all donor funded projects will also start using the e-GP system as the e-Procurement system is being enhanced to provide user access to the World Bank project units and other development partners for managing and monitoring the project progress. Rwandan broke the glass ceiling in Africa and created a riffle effect in the continent and beyond embarking on e-GP journey.