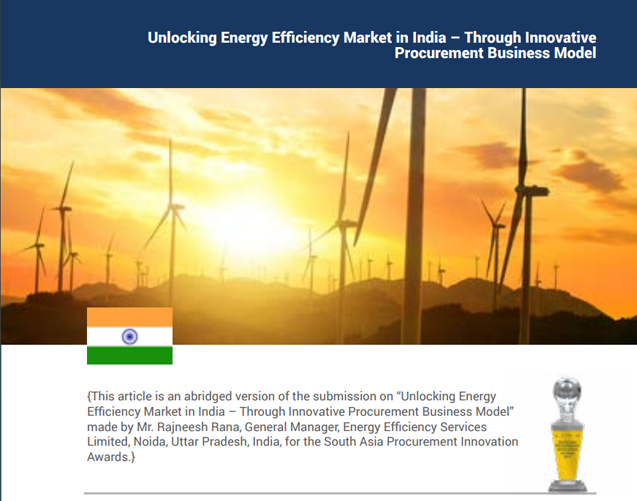 
Energy Efficiency Services Limited (EESL), through its innovative, transparent, and fast procurement-based business model of consolidating demand for products, is promoting the environmental sustainability goals of the Government. The business model is also helping in market transformation in terms of pricing and production of energy-efficient products in India. With its mandate of conceptualizing and implementing country-wide programs that promote use of energy-efficient products to meet the country’s sustainable development goals, EESL’s business model, focusing on procurement, is setting the roadmap for making energy efficiency more accessible and affordable in India,without imposing any subsidy burden on the government. By implementing UJALA (Unnat Jyoti by Affordable LEDs and Appliances for All) and various other energy-efficiency programs, EESL has tremendously reduced the burden of energy bills on the country’s people and organizations. By aggregating demand through the program, EESL could present the volumes required as ten times or more in a single lot of procurement for LED (Light Emitting Diode) bulbs that led to reduction in prices of energy-efficient appliances, like LED bulbs, by 70–80%. In 2014, market price of 7W LED bulb was Rs. 550. In 2017, its discovered price in UJALA tenders fell from Rs. 310 in 2014 to Rs 38 in 2017, while its Lumen/Watt quality at the same time increased from 70 Lumens to 110 Lumens. More importantly, use of LED bulbs has reduced the power bill of average households by almost 90%. Likewise, Solar PV (Photovoltaic)- based agricultural pump sets have enabled farmers save 30% on their farming operations, thereby increasing their income. The revolutionary change brought in by EESL has led to replication of its ESCO (Energy Service Company) model in other countries, including Malaysia, Kingdom of Saudi Arabia, and the United Kingdom.

The success of ESCO Service business model is owing to its efficient procurement strategies. In this model, EESL invests the complete amount in a project upfront, i.e. equity of 20% and debt 80%. The cost is recovered from the client through annuities in a time frame of 7–10 years. Due to effective planning, demand forecasting, and 5Rs of Procurement (Right source, Right time, Right quality, Right quantity, and Right time), EESL is able to leverage demand aggregation and economies of scale. EESL has reached the masses by distributing 280 Million LED bulbs since the inception of UJALA in 2014. Similar has been the performance of SLNP (Street Light National Program – LED street lights), Energy-Efficient (EE) agricultural pump sets, and EE fan distribution programs, which have, in turn, accelerated the growth of domestic industries. EESL has thus created a new normal through large-scale transformation, helping consumers get more with the same energy consumption while boosting industrial growth.

With every program, EESL had faced a number of challenges in the form of:

EESL addressed these challenges through numerous ways. To ensure transparent, timely, and speedy procurement, EESL switched from manual tendering to e-tendering method in 2015. With regard to quality of appliances, it asked participating bidders to provide test reports from National Accreditation Board of Laboratories. EESL’s e-tendering portal has the certification of STQC (Standardization Testing and Quality Certification), an apex body of the Government of India for quality standards. The portal’s audit, conducted by a multilateral bank, has found that EESL’s tendering process is in compliance with international standards.

EESL innovative market-led business approach ensures value for all stakeholders, including consumers, industry, and the country at large.

Globally, public sector has been traditionally used to subsidies for making transformative solutions affordable. But EESL’s approach uses the novel business model of no subsidy and Pay-As-You-Save (PAYS). PAYS model obviates the need for any upfront capital investment. Further, the organization’s approach to aggregate demand makes the market attractive enough for industry. For example, before EESL’s intervention in 2014, penetration of LEDs in domestic market was 0.1%. After successful implementation of the Demand Aggregation model, this increased to 20% in 2017. Production of LED bulbs has increased to about 4 crores/month from 10 lakh two years ago. EESL has evolved a Service Model to enable municipalities to replace conventional street lights with LEDs at no upfront cost. The cost is recovered by monetizing energy savings.

The success of EESL’s energy service model has created a blueprint for commercial growth of companies in the Indian energy-efficiency space. The model is now being replicated to transform electric mobility, smart metering, energy-efficient agricultural pump sets, and solar roof-top programs in the country. The agricultural pump sets program faced many challenges since farmers are getting electricity free of cost in many states and thus see no advantage. EESL has mitigated this challenge by creating awareness and convincing farmers about the increase in flow of water by adopting scientific method of pump selection. The success of UJALA scheme has led to its replication in Malaysia’s Maleka. UJALA is being implemented in UK too. The Kingdom of Saudi Arabia has sought collaboration with EESL to replicate India’s successful domestic and street lighting programs.

Through the India Energy Efficiency Scale-Up Program, the World Bank is supporting EESL in scaling up its priority initiatives with regard to energy savings in residential and public sector. What adds to the sustainability of EESL initiatives is running of its programs on a market-led approach, rather than the traditional approach of incentives and subsidies. With the Government of India envisaging transformation in many new areas to fulfill its commitment of reducing CO2 emissions and switching to cleaner fuel options, EESL is planning an Electric Vehicle program, along with charging infrastructure in India. The National Electric Mobility Mission Plan seeks to have 400,000 Electric Vehicles (EVs) on Indian streets by 2020. Recognizing India’s efforts towards a low-emission economy, the Global Environment Facility (GEF) has now partnered with EESL for Creating and Sustaining Markets for Energy Efficiency. The project will receive a composite funding of $ 454 million. EESL’s efforts have been appreciated and recognized at international platforms, with World Bank President, Dr. Jim Yong Kim, making a mention about it at the climate change event in Paris. Early next year, EESL will use a USD 220 million World Bank loan, combined with an 80 million dollar guarantee facility, and leverage $ 200 million of commercial finance, to deploy thousands of electric cars and charging stations and millions of smart electricityconsumption meters throughout India.

Conceiving a project on paper is far easier than taking the same to execution on the ground level with economic viability.

Some of the programs announced by EESL in initial years were not able to gather enough attention from the manufacturer and consumer side.

By organizing industry awareness programs, elaborate pre-bid meetings, and accommodating as many suggestions received from the industry, EESL has created a positive environment for competition and ensured maximum participation.

Majority of its tenders are being wrapped up in 45 days, with well thought of payment terms reinforcing active participation by prospective bidders.