Towards a Single Market for Public Procurement in Caribbean Small States 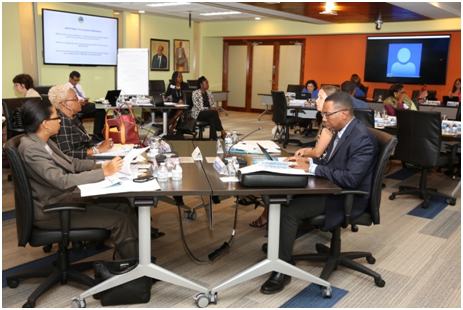 The first ever meeting of the Heads of Procurement of the Organization of Eastern Caribbean States (OECS) took place on June 20-21 in Barbados with the dark storm clouds of Tropical Storm Bret as the backdrop. Fittingly, the discussion focused on how to create a common market for public procurement and to use procurement as a tool to better prepare for and respond to the natural disasters endemic to the region.

The meeting, which the World Bank and the Caribbean Development Bank (CDB) jointly organized at CDB's headquarters, brought together Chief Procurement Officers from eight Caribbean island nations. Representatives from the UK's Department for International Development (DFID), the OECS Commission and the CARICOM Single Market and Economy Program also participated.

"The workshop served as a constructive platformfor straightforward discussion on procurement and its attendant issues. The OECS countries were afforded a worthy opportunity to share experiences, consolidate a common understanding and set a path to further advance practical and realistic measures to modernize our respective procurement systems" said Mr. Sean Cenac, Permanent Secretary of the Ministry of Finance of Antigua and Barbuda and Chairman of his country's Tenders Board.

In 2010, the seven full member states of the OECS signed the Protocol to the Revised Treaty of Basseterre – the OECS's founding agreement. This protocol established an Economic Union between OECS countries, including a single currency and a Central Bank. However, with regards to public procurement, significant barriers to inter-island trade and cooperation remain.

During the meeting, the Heads of Procurement concluded that their national procurement systems were developed without coordination with the other OECS countries. This means that a patchwork quilt of disparate laws, regulations and guidelines now exists, creating a confusing and uncoordinated procurement system.

Although a common public procurement market has been legislated by treaty, in practice, the member countries' public procurement markets remain largely inaccessible to one another, resulting in lost economic opportunities. Private-sector construction contractors and other service providers in one OECS country interested in bidding for a public contract in another face bewildering bureaucratic hurdles.

The countries discovered promising opportunities for collaboration through this meeting. One country could leverage its comparative advantage in an area to provide leadership and support the other countries in their reform efforts. For example, Tiny Montserrat, with a population of just 5,000, – is already piloting its own e-procurement system and can advise other countries as they start to adopt similar technologies.

"The meeting exceeded its objectives and, as a next step, we plan to formalize an OECS regional network of procurement professionals by establishing, among other activities, a web presence where members can continue to exchange ideas and experiences. We will also support countries to analyze their existing procurement data and publish them on government web portals, which will provide an immediate boost to transparency," said Shaun Moss, Lead Procurement Specialist at the World Bank.

A new opportunity for reform and modernization
In January, the World Bank secured a grant of US$5.6m from DFID to finance public financial management reform in the OECS. US$1.6m will go towards reforming and modernizing these countries' public procurement systems over the next three years.

"DFID recognizes that good public procurement is a cornerstone of any country's public financial management system and is essential for securing value for money and we are very happy to be providing support in this area," said Danny Quinn, Economic Adviser at DFID Caribbean.

Looking ahead, the DFID grant will finance an ambitious work program of reforms. The short-term goal will focus on making procurement more transparent by publishing data on transactions on existing government web portals. Another priority goal is to more effectively streamline the Framework Agreements so that governments can contract urgently-needed construction works and emergency supplies before a natural disaster strikes. This will improve countries' preparedness and resilience.

Over the medium term, the grant will finance the development and electronic government procurement systems, which will increase the productivity of the very limited number of public officials who work on procurement in each OECS government.

No matter how dark the storm, it eventually passes. The exciting procurement reforms now taking off in the OECS promise a brighter future for its member countries.