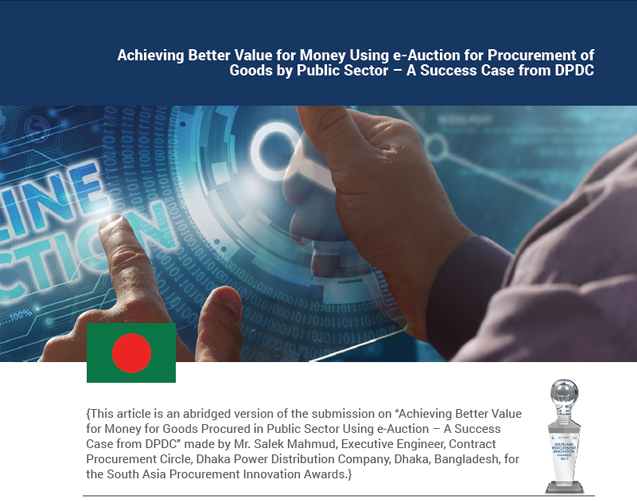 One of the ways to get better value for money for goods procured using public money is to ensure a better selling price for these goods when they come to the end of their usable lifespan. Traditionally, Dhaka Power Distribution Company (DPDC), a government-owned company of Bangladesh, like the country’s other public sector organizations, had been disposing ‘end-of-life’ goods through manual auction system (forward auction), which hinders better returns. DPDC, for the first time in the history of public sector auctions in Bangladesh, introduced an electronic ‘e-auction’ platform that has proved to be a very successful innovation by achieving the desired results. The system is highly scalable and adoptable by all public sector organizations of Bangladesh. It is also sustainable in terms of profitability, is pro-people and environment friendly. Still very new in Bangladesh, there is, however, room for improvement in this e-auction system.

One of the major goals of public procurement is to ensure 'value for money', which means buying goods that are effective and 'economic'. Getting lowest price for goods procured is important but not enough. To achieve economic cost, lowest ‘life cycle cost’ is to be attained. One of the ways to ensure this is getting a better selling price for goods sold at the end of their usable lifespan. If the return from such salvage is high and disposal cost is low, then the net cost decreases, resulting in higher 'value for money'. Traditionally, in DPDC, like in other public sector organizations of the country, disposal of 'end-of-life' goods had been made by selling them through manual auction system. The manual system has multiple problems, including lack of sufficient competition or no competition at all, resulting in lower than the expected price offer. It is often reported that some unscrupulous bidders manipulate the offer price by making unholy alliances among themselves or applying coercive power to prevent other interested parties from biding. In this backdrop, DPDC decided to do things differently.

For the first time in the history of public sector auctions in Bangladesh, DPDC introduced an electronic 'e-auction' platform for selling used goods; moving the whole auctioning process from the manual mode to electronic mode. This way, till date, DPDC has completed 7 e-auctions. Against the expected value of BDT 7.2 million, a total of BDT 8 million was received, an amount that is 10.77% higher. It is also worth mentioning that even the level of competition has increased.

Introduction of the new e-auction system has made a positive impact in many ways. Now, 'end-of-life' goods are being sold in less time compared to previously, when there was manual auction. Competition has increased - resulting in better prices for goods sold through e-auction. There is reliable and clear audit trail, accountability, transparency, and fairness within the auction process. Store management has become easier and space is now free due to timely disposal of used goods.

In the newly introduced system, interactions between sellers, buyers, and banks are electronic. Banks connected with the DPDC auction system have played a very important role in the system becoming a success. Bidders can transact with DPDC through the designated banks. Received bids are evaluated and a work order issued to the highest qualified bidder through the e-auction site. Then, the winning bidder pays the remaining amount, except the security money deposited earlier, using a payment slip generated by the system at the designated organizations of other countries, as well as private sector organizations, for selling their used goods.

Any system becomes sustainable if it successfully meets 3 Basic Ps - People, Planet and Profit. The newly introduced e-auction system in DPDC has successfully met these three criteria, apart from being economically beneficial. The system is consistently generating more than average returns from selling of used goods, thereby bank. A delivery order is issued by the system to the winner for delivery of goods from stores.

The emerging picture clearly shows that the new system is very suitable and highly replicable in all public sector organizations of Bangladesh, as almost the same context like DPDC prevails in them. DPDC is hopeful that this e-auction system will be adopted by all other public sector undertakings of the country with some customization. This auction system may even be adopted by public sector ensuring capital for future investment. This system has also had a positive impact on macro-economic levels, as goods sold though e-auctions are reused or recycled, thereby boosting the recycle industry and improving the environment. It is also generating more business in the SME sector, leading to employment and contributing to GDP growth.

DPDC represents only a very small portion of the total public sector auction requirement. If all public sector organizations of Bangladesh start working using this type of e-auction system, then overall positive impact on national economy will be significant. As recycling or reuse of goods uses less energy, it also helps the planet by putting lesser burden on its energy resources. The system is also pro-people, as automation reduces their workload. Further, record keeping is organized and easy.

The following are the lessons learned: